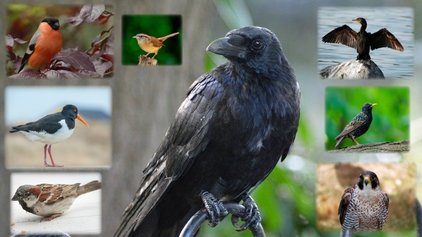 This is my campaigns page, where you can find information about my current petitions.

There are two campaigns I'm running at the moment, please share the petitions far and wide and thank you for your fantastic support with this,
Best,
Jase

STOP THE LEGALISED KILLING OF WILD BIRDS IN ENGLAND
​
This petition to save our treasured wild birds has really taken off.
It began as a response to the issuing of licences to farmers permitting them to shoot ravens which, they alleged, were killing lambs and other livestock,  a claim that appears to be based on very little evidence.
When, through my freedom of information request, I revealed that Natural England had been issuing licences to exterminate dozens of British bird species, there was outrage across social and mainstream media - and so I amended the raven petition to include these other species.
With nearly 400,000 signatures so far, this has become one of the biggest and most influential petitions on Change.org, and we have brought significant changes to the licensing system.
There's much work still to do and the campaign continues to grow.
You can sign the petition: HERE

​My 'Feed The Birds' campaign aims to support those kind and compassionate individuals who feed our urban wildlife.
With many local councils in the UK using 'anti social behaviour' bye-laws as a way of imposing penalties on people for feeding the birds, I set up the petition to outlaw this silly practice.
Many live in fear of being handed a hefty fine for this simple act of human kindness towards animals.
Those being targeted include elderly and vulnerable members of society whose only 'crime' is throwing a few crumbs to wild birds such as pigeons and gulls.
I received confirmation from DEFRA, the British Government department responsible for the environment, that it is NOT illegal to feed wild animals, including birds, and that if a person receives a fine then they can challenge it with the local council or the local government ombudsman.
The campaign is gaining support on social media and the petition is available to sign and share: HERE.
Copyright © Jason Endfield 2021: all rights reserved.
Disclaimer:-
The views and opinions expressed on this blog are those of the author(s) and do not necessarily reflect the official policy or position of any other agency, organisation, employer or company. Assumptions made in the analysis are not reflective of the position of any entity other than the author(s) - and since we are critically-thinking human beings, these views are always subject to change and rethinking at any time.
Comments on this website are the sole responsibility of their writers.
This is a personal weblog. We make no representations as to accuracy, completeness, correctness, suitability or validity of any information on this site and will not be liable for any errors or omissions.
All information is provided on an as-is basis. It is the reader's responsibility to verify their own facts.
Please note that all content on this blog is copyright and may only be reproduced with the express permission of the author.